Groovy, Fun and Oh So Different - the Self Titled New Record from Desmond Jones

November 21, 2017
I think we all know that music in general is full of egos and people that take themselves way too seriously. No scene is immune. No genre is exempt. I'm not saying some people are not justified in their talents to have such an attitude and demeanor, because they are...but it's exhausting. Every so often though, it's nice to come across a band or an artist that has the talent but realizes that shit...life is short. Why you so serious, man?

Enter Desmond Jones, a five piece funk-jazz-jam band rocking it's way from Grand Rapids, MI. This is that band for me lately. Have you folks gotten to give these gents a listen yet? If not, let me direct you on over to their website HERE and give yourself a treat. Listen to the new record and meet the band on their about page. The bio for these guys sings the praises of Batman, cured meats, and Stevie Wonder. Honestly, I read their snippets and I wanted them to be my best friends. 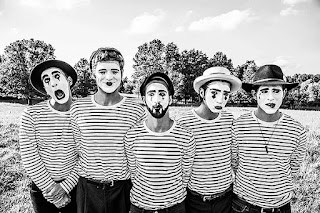 I was privileged enough to get to review their 2017 self  in titled album for The Jamwich a couple months back and it was this wonderful breath of fresh air in both it's unique groove and entire overall demeanor. This is a band of gentlemen well versed in their individual instruments and able to write the perfect earworm song. The album is a blending of sophisticated jazz and mid-90's lighthearted rock tossed in a blender with some funk and jam mentality. Pour it in a glass, garnish it with a dash of "stop taking yourself so seriously" and you have Desmond Jones. It's refreshing. It's wonderful. I'm addicted.

The songs are a sweet mellow jazz at times and then seamlessly turn the corner into jam rock inventiveness. Songs like "I Recall" really impressed me with over seven minutes of instrumental story telling before transitioning to a sweet alternative rock ballad feel with this sound that reminds me of a really smooth take on The Fugs if the Fugs did jazz and funk. (if they ever cover Boobsalot, I might explode) The guys in Desmond Jones don't want to be anyone but themselves, and it really comes through in their songwriting. They have something unique. This is what I am loving about music coming around lately. The old formulas are there, but there are still artists finding new paths for it. Desmond Jones is tapping that hard.

"Get Along" starts out with really sexy saxophone work. It slowly builds then into something funky and grooving, while occasionally still breaking down into that sassy tone. Then it picks back up. It's steering wheel tapping driving sounds. There is this addictive guitar beat with steady drums that marches through. Then come in the vocals. I'm still laughing from the first time I heard it. Now I am not wishing a break up on anyone because they are horrible but IF YOU DO have one...this will be your breakup song of 2018. Despite the laughing, the song goes sultry again before it ends and you are reminded in a big way that these guys can write. These guys can play. The sounds they put together are not typical and I just respect the hell out of what they are doing.

Now onto that earworm thing.
What are you TALKING about, Amanda?

You know what I mean. That song that upon first listen, you are smiling. Then second listen you are singing along. Then third listen you know all the words and OH MY GOD I CAN'T STOP. You are singing it in the grocery store, you are singing it to your kids, you are singing it in the bathroom. That is "Good Song". It kind of reminded me of early Ben Folds on my first run through the album with that kind of over-sized corduroy and coolness vibe. Then the chorus hits and there it is. Not since Mephiskapheles covered the Bumblebee Tuna song have I had a tune so often just pop into my head and cause spontaneous singing. And it's so good. The first time I reviewed this record, I was sitting with my very metal loving 12 year old son. By the end of the song, he was singing it right along with me. You don't have to take my word for it. You will see for yourself when you burst into song in the checkout line at Target...

I have had the pleasure of reviewing some incredible records this year, and honestly it was nothing short of a complete pleasure to add Desmond Jones to that list. I love a band that makes me stop and go "Man, these guys come up with some fun stuff!" I am really hoping I can add them to my growing list of live shows in the new year. These guys represent that shift I am seeing and have talked about before with some of the newer bands coming up on the festival circuit. I hope I am not the only person taking notice, but I know I am not so you heard it here first, folks.

Desmond Jones is finishing out 2017 with some dates around Michigan including a night at The Blind Pig in Ann Arbor on December 1st. You can get a full list of their show dates on their website HERE.

Get on board with Desmond Jones. I think their 2018 is going to be pretty damn exciting.