September 19, 2012
Last week, this album was dropped into my inbox. There is always that moment before I hit play on a new record when I wonder what it's going to do to me when it starts. Where the music is going to take me. Am I going to cringe? Am I going to smile? Music is a lot like other beautiful things in the world...it's appeal lies in the ears, the mind, and the soul of the person listening. It's a gleeful anticipation for me...that moment before the music starts. It's complete silence that I know will be broken by something that could be anything. Amazing or dreadful. Soothing or piercing. It's a delicious kind of anxiety...

I put in Follow My Sound by The Prizefighters, and I hit play. I let the music begin. Soulful. Soothing. But I am dancing where I sit. From the moment the second track kicked in, it's been on an almost constant rotation. Who the heck are these guys?! (and gal!) 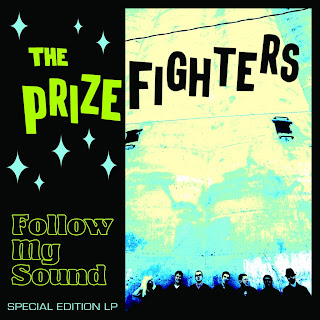 They are the Prizefighters, from way out Minneapolis, MN. Started in 2006, they have been playing their brand of throwback ska on stages with everyone from The Aggrolites to the English Beat and the Toasters. Certainly no small fete in this notoriously fickle scene. This Friday night, they open for my beloved Slackers and the Green Room Rockers at Triple Rock Social Club in their home base of Minneapolis.

You can get tickets for that show HERE.

If you are within driving distance, I suggest highly that you get yourself to this show. You will not be disappointed. They are pretty damn fantastic.

The Prizefighters have a great blending of rocksteady groove and modern ska flavor layered with gritty, almost gravely vocals and harmonies. It's a really good sound. Addicting. I have been sitting here with the album in my headphones, and every so often I have to hit repeat on a song that moves me. The title track, Follow My Sound, has me in it's grips right now. It's a very soulful vocal heavy song that kicks in with organ and those raspy vocals I am loving, and maintains that groove all the way through with a quick break for a brassy solo.

This album is not all soulful vocals and swaying though. Second track Outside My Window is one of those songs where if you can stand still while listening, I don't know what to do with you and I think something inside of you might be broken or defective. Still with those sexy raspy vocals, but the upbeat tempo held fast by a thumping bass and drum beat gets inside of you and makes you dance. Peppered with brass and sing a long backup vocals, I can't help but crave this song in a live venue.

I can't help but crave this band in a live venue, in general. They have a traditional sound but it's simultaneously modern and fresh. It's fun. Truth and Lies holds my attention at the moment for favorite track on the album. Tapping percussion and powerful vocals layered over a horns and a beat I can't help but move to...it's amazing. This is happy, grooving, driving ska that get's under your skin and into your soul. It's music for crackling vinyl, dark smoky clubs, and dancing with pretty girls. Or at least that is my vision, listening to songs like Before Tonight. Give it a listen and see what you feel...

I'm sold. Pick up this album. The Prizefighters - Follow My Soul. On a side note, the album itself was expertly mastered by my home state of New Jersey's own scene pioneer King Django. It's no surprise. This album will be in heavy rotation on my radio show starting this Sunday, and I can guarantee I will be getting e-mails of praise and request after one spin. It's that good. How did I not know about this band?

In addition to their show with The Slackers this Friday, the Prizefighters will be in Chicago on November 17th at the Mayne Stage backing the legendary Stranger Cole. That is going to be an incredible performance. If I was not 700 miles away, I would be there. I wonder how long that would take to drive...

You can find information about that show HERE.

You can get information on The Prizefighters and their album Follow My Sound HERE. 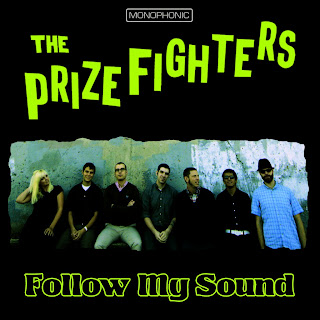