April 30, 2019
I don't know about you, but there is nothing I like more right now than Breakfast. More specifically, The Breakfast.

The Breakfast started way back in 1998 in East Haven, CT originally as The Psychedelic Breakfast, a play on the Pink Floyd song Alan’s Psychedelic Breakfast. They released their first album in 1999. There have been some lineup changes here and there, but the one thing that has always remained consistent when someone talks about the band is how freaking GOOD they are. The Breakfast is comprised of some of the most intensely talented players within and well outside the jam scene. Tim Palmieri, best known for his incredible work with Kung Fu and Z3, is on guitar. Adrian Tramontano, also of Kung Fu as well as about a million other projects and instruments because he’s that good, is on drums. Chris DeAngelis, also of Kung Fu as well as his solo project LoEndFreque , is on bass. Jordan Giangreco, who has played all over as well including in Viral Sound, is on keys. Everyone does vocals on this record. Everyone, and the vocals are amazing. This is a legendary band full of far above average players. It’s been a while since we had new music though, their last release being a self titled release from 2008.

Well, guess what? The Breakfast put out something new and amazing for 2019 called Phantasmagoria, and believe me when I tell you that you need this record in your life. 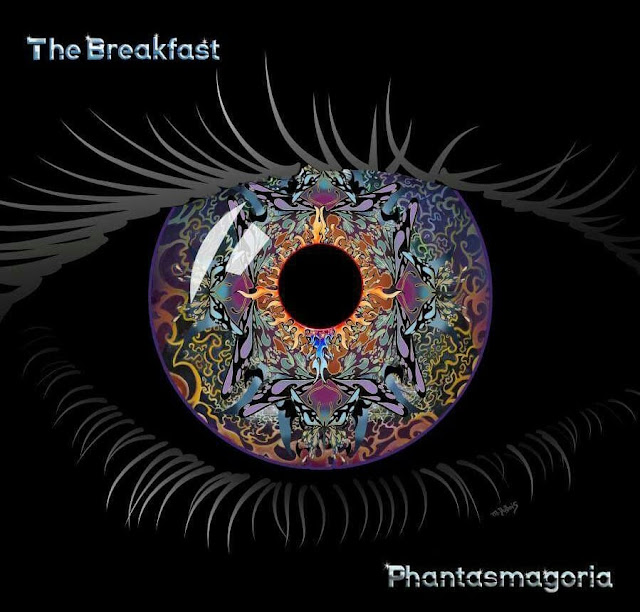 There is this insanely diverse variety of tastes and sounds comprising the songs on this album, all of which take you in a different direction while sticking to the same excellence that we fully expect from these guys. This album is like a really good buffet. Every song gives the listener the opportunity to sample a different flavor. You don’t have to settle into anything though because the next plate you come to is another sound, another direction, but still the same outstanding writing quality and playing. There are options you didn't even know you wanted! You can play the album through and taste it all, or easily get stuck on any one of the individual tracks and stay there a while. You can do both. Either way, you walk away satisfied.

The first track, Metropolis, has a heavy hitting but still jam tasty sound. The vocals are straight rock with intense backup harmonies laid over grooves reminiscent of late 70’s funk rock. The solos, and they be many, take you to another world each time they start. Palmieri’s incredible chops show brightly here on guitar with that effortless intensity he is so damn good at. The drums, as usual with anything Adrian touches, are above and beyond normal. He’s one of those drummers that you see play and you stop dead in your tracks just to watch because it’s just not normal to be that good. The bass is other worldly as well. One of the things I like best about Chris DeAngelis and the way he approaches the instrument is that he can make it make sounds that I didn’t know a bass could. There are lots of people out there playing bass. There are few that make it sound like Chris does.

The next track, Shotgun Butterfly, takes a whole new direction from where you were. It’s got a bluesy cool in the vocal and groove. The sound is just enough heavy rock, just enough dirty, but still brings that funk undertone. The keys are cool and laced through the song, brightening up while the bass takes it darker. It’s a cool contrast that adds to that hip swinging cool thing that the song has. Right about the 2:45 mark, the song breaks down into solos that will melt a little bit of your brain. The record then skips over to the track Rush which goes is a completely different direction from the last two songs. This song sounds like someone threw a couple ska punk bands in a blender with Frank Zappa and gave everyone a lot of coffee. The song then goes from a skanking upbeat dance party to a thoughtful, intense and a little bit spacey jam. It’s three different directions in the first three songs. But wait, there's more!

Another track to check out is Rust, a rock track with a great chugging groove and great vocal. The bass in this song is crazy good and the keys are otherworldly. Jordan Giangreco does this thing with piano in this song where the keys trickle and travel along. You can almost see the notes dotting an imaginary line in your mind that dips and ducks like a rollercoaster. It's one of my favorite aspects of this song. Another great thing is how everything gathers in this song. All the components and pieces come together and create this incredible collage in your mind as you listen. The Breakfast are just not like other bands. They are not one trick pony songwriters. They don’t put sounds together like other people. This is a mashup of players who look at music like the language it is and they sing it as many ways as they can. You can just sit and listen to each song and dig into one aspect of the track. Then you can start the same song over and dig into a completely different aspect of the track. Each song is a multifaceted work of art that wants you to shake your tush. This record is really freaking great.

Don't take my word for it, as I am simply your guide on this journey! Get yourself a copy and give it a good, hard listen. You won't be the same. You can get your listen to Phantasmagoria from The Breakfast right on Spotify, or purchase your copy on their Facebook spot. Better yet, catch them doing their thing live all over the damn place this festival season! They will be hitting Branch Fest 2019  at the end of May and were just announced as part of this year's Disc Jam 2019 lineup, thanks to intense voting by fans! Get out there and get some Breakfast!