Can I tell you how many times we used to crank The Stubborn All-Star's "Open Season" in my younger days? I first heard it on a "Give Em' The Boot" compilation I think I found at Hot Topic, somewhere in the 90's. The 90's are a blur. I still find myself quoting it, playing it regularly on my radio show (it often opens my show, because how appropriate is that?), and probably annoying the ever loving HELL out of the people who live above where we presently broadcast from in Stroudsburg, PA with my obnoxious, loud singing and dancing. Of course I do this song no justice. The Stubborn All-Stars were led by none other than King Django. I have been chasing this gentleman for weeks. I can be really annoying when I want something, and he finally gave in.


When it came time for me to launch my summer ska series on my radio show and my blog, I wanted to focus on the NYC scene...which of course branches into New Jersey and Pennsylvania, because who the fuck can still afford to live in the city? Besides...Jersey has taylor ham. New York and it's scene has a particular vibe to it. The music that came out of it, and continues to come out of it, is a breed all it's own in it's flavor and it's energy, and the ska and reggae scene is no exception. But anyone who knows this area knows it bleeds into Jersey via bridges, tunnels, and speakers, and Jersey is where I call home. Head on South a bit, and you land in New Brunswick. Rutgers, fat-cats, and King Django's Version City Studios. It's a magical land of ska, reggae, rocksteady, and the like expertly threaded together by King Django himself, also the home of his own legendary Stubborn Records.


It's an honor for me to include anyone in this series who did as much for the scene as Django has, and continues to do. He is a pioneer in the NewYork ska scene going back to the 80's. Whether it is his own projects, as a contributor, or helping to record and produce fellow musicians in the scene, he continues to put his stamp on the music that still brings people to the sweaty dance floor to this day. It's also an honor to be able to profile someone who's music was and continues to be in my own ears as much as his has. Be it with Stubborn All-Stars or Skinnerbox. Plus the countless artists who's work he was a contributor to...Murphy's Law, The Slackers, The Toasters, and Rancid, just to name a few.


Look at this crazy discography!


Next weekend, Django's Stubborn Records label celebrates it's 20th anniversary with a show at the Knitting Factory in Brooklyn. Performances by Django himself an others set this show up to be something not to be missed. I caught up with the man himself and was able to hold him down long enough to answer some questions for me.


What have you been up to? What are you working on?
King Django: I have been up to my eyeballs!  The Stubborn Records label is celebrating our 20th anniversary this year, with a HUGE party happening on May 12 at the Knitting Factory in Brooklyn. In honor of the anniversary, we've just released two new 45s in cooperation with Ska In The World Records from Tokyo Japan.  One is a new mix of  "Anywhere I Roam" with my friends the Forthrights, backed with a fun ska cover version of "Career Opportunities" originally by The Clash.  The other is some crazy electro-dancehall-roots music (Forward backed with Rescue Mission) I did with my good friend Ari Up, who is no longer with us.  I'm glad we were finally able to get that one out.  And yesterday, we just got in the first CD celebrating our 20th Anniversary- Victor Rice's "Dub Discoveries From Version City" which is fresh, new dub versions of a great, eclectic sampling of our whole catalog, going way, way back.


In the studio,  I've been very busy doing a lot of recording, mixing and mastering for other bands and artists.  Most recently I have been working on an EP with The Snails from Pennsylvania, with whom I have recently played a bunch of shows.  Did some recording, mixing and mastering for some of my friends in Staten Island called "Not From Concentrate" for their upcoming EP. I mixed several tunes for the Forthrights next release, and am mixing a showcase album for CHX Sound System from Quebec City!  In between, I have been working on my next album, which is getting close to finished.  That's going to be really fun, it features a lot of my friends from all over the place.


What kickstarted your entrance to ska/reggae music?
King Django: I was originally introduced to the 2-Tone sound in the end of the 1970s!  After that I quickly became enamored of Jamaican music. I was not a musician at that time.  I started playing trombone specifically to play ska and reggae music!

Where do you think ska music is headed in 2012 and moving forward?
King Django: I have no idea whatsoever!  I'm a bit old-fashioned.  I tend to really listen to older music in general, and when it comes to ska and reggae, I am still most interested in the original Jamaican sounds.  I think the trend for a while has been this rock-infused version of "early reggae" but I have been hearing the stirrings of a return to the traditional ska sound...  There are only two kinds of music, at the end of the day!

What are you most excited for in the coming months?
King Django: After the Anniversary party, I am super-excited about finishing up my new album!  Then I get to move on to finishing the new Hub City Stompers record and the Dr Ring Ding Version City album!!!  Also really excited to start rehearsing new and different material with the King Django band!  We're looking around for different venues to float the Version City party to, so I think it's going to be a really fun summer, fall and winter this year! 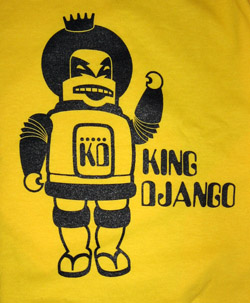 No matter where it is headed in the future, I think the ska scene can count on the continued contributions of this multifaceted gentleman and his talents to be there fueling the fire, and that is a win for everyone. I for one am ready for the next chapter.

If you are wise, you will get yourself to the Knitting Factory in Brooklyn May 12th for the Stubborn Records Anniversary Party. Expect performances from The King Django Septet, Hub City Stompers, Rudie Crew, Skinnerbox, The Heavy Beat, and more. Pull on your best trousers, and get yourself on the floor.

Purchase your tickets to the show HERE

More information on the show HERE